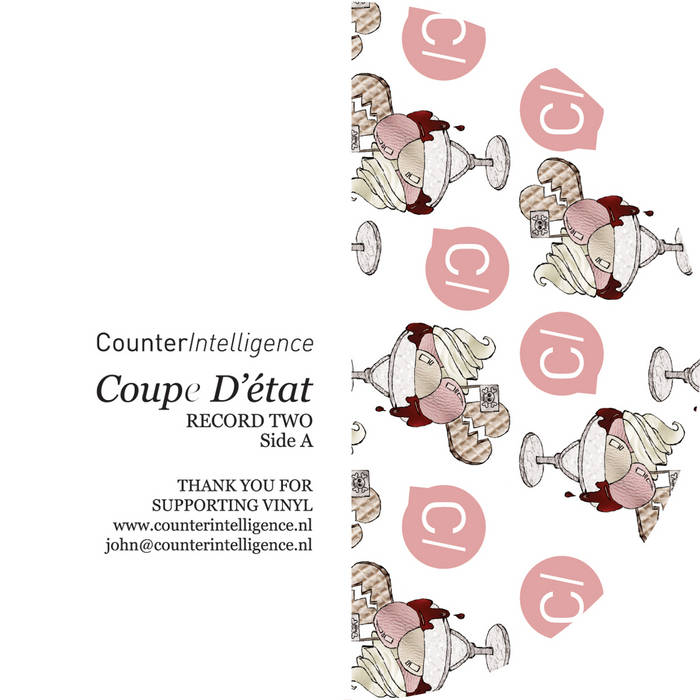 Counter Intelligence presents the next installment of left field drum & bass in the form of the label’s second album, available separately as four vinyl singles and collected in different editions with bonus items like digital downloads and even a limited edition handmade Counter Intelligence headphone bag, that's also used by several of our artists.

Entitled Coupe D’état, the title captures the meaning and intention covered by the music and artists involved in this display of the versatile sound that Counter Intelligence has come to be known for since the inception in late 2004. The label’s back catalog already comprises timeless music by Resound, Paradox, Macc, Beta 2, Alpha Omega, Pieter K, Martsman, Dissident, Equinox and Fracture & Neptune amongst others.

Fractional has been active in the Dutch drum & bass scene for a number of years. He started and co-hosted one of the most successful club nights in Rotterdam: Prospect. Eduard has also been a resident for the Counter Intelligence club nights since we met in 2006. Being a self taught producer with influences ranging between Photek, Bad Company and Dom & Roland we foresee a healthy musical future for him on the label and further abroad!

His first delivery is indeed a hefty one. Actually, we daresay that his ‘Outbreak’ is THE hardcore tune of 2013.
Starting off with a commanding vocal and pumping rolling half-step beats and growling bass, it turns into a screaming hardcore laser-powered synthesizer monster with one of the scariest sub basses we have ever heard over our club’s sound system. Recommended to those looking for floor killers, guaranteed fresh for years to come.

Flip the record and you get proof that Fractional knows more than just making thumping drum & bass.
An odd beat workout with ebbing synthesizer washes layered over a throbbing sub bass, ‘2046’ meanders slowly building tension. While the track never brocks out, its segments are continually building with tension, each time more than the last; the second time with added whispers of vocals and extra grit added in the snarling bass line; the third time it adds hysteric laughter and heavily delayed sound FX atop disturbing strings. This track is perfect for bringing something unique to those very late-night sets!

The last tunes on the first half of the album feature Counter Intelligence stalwart Dak from Espoo, Finland.
His minimalistic approach to Drum & Bass and Techno has garnered him wide spread attention as far back as 2002, inevitably leading to his brilliant ‘ Nutcase’ on CI004 which was featured on the smashing Knowledge Mag mix cd ‘ Unsung Heroes’ by Brett Clever, boss of New York’s excellent left field label Offshore.

After taking a break from D&B and immersing himself in classic instruments and the lower bass registers of dub techno, Dak is back with a slew of tracks heavily inspired by the bleak techstep sounds of 1997-99.
For both ‘Ovi A’ and ‘ Ovi B’, your reference should be dark-as-hell tracks from Decoder & Substance. Both tracks round out every DJ’s selection, fitting in great between drumfunk, darkstep, minimal and jungle styles. Nuff said!

Are you playing this out loud too? Let us KNOW!

Counter Intelligence is based out of Tilburg - the Netherlands.

We are breakbeat-oriented with influences ranging from atmospherics to electro, ragga to techno. All keeping the dance floor in mind but not avoiding experimentation.

We aim to bring musical diversity back into drum&bass and found inspiration in groundbreaking labels like Certificate 18, Droppin' Science, Partisan and Reinforced. ... more